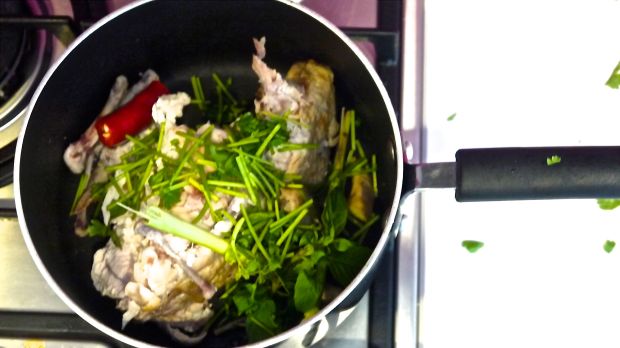 I’m feeling very blessed at the moment, working in London’s Wet End. There are just so many options for lunch. Although many are not cheap, everyday options, there must be over 50 takeaway food joints within a 10 minute walk from my office sampling 20 to 30 different cuisines for under a tenner. Currently, when I am feeling very flush I treat myself to something delicious and healthy from itsu. Japanese food has been a bit of a revelation to me in the last few years and, although this is not real japanese, it is still perfect for an asian inspired lunch on the go. Plus, their sushi comes with loads of wasabi and pickled ginger which is a must for me!

Today I really fancied one of their potsu dishes, noodles served in various warming spiced broths. Unfortunately, however, today I did not find myself particularly plump in the pocket so had to opt out. I still found myself craving the soothing warmth of noodles and chicken, the ideal antidote to those first suggestions of winter. Therefore, I decided to have a pop at making something similar myself.

This recipe works best as a use for leftover road chicken but alternatively you could cook a chicken breast in a tinfoil parcel in the oven and make the broth with chicken stock (this would be far quicker but not as tasty). I also should mention for any sticklers out there that this is not a proper pho at all, I skipped many of the ingredients because they are hard to find and expensive.

Washing up rating *** I Used: A pan, a knife, a chopping board, a sieve, a bowl and some chopsticks.