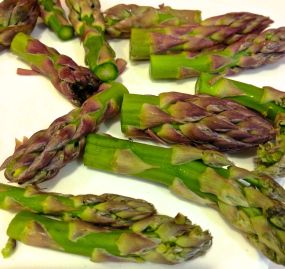 So I have finished with uni for the year,  but I have not been free to revel in domestic bliss for long. Today was the first day of my two month summer job working as an ‘administrator’ (i.e. general dog’s body) in a financial advice company. Not only is the work dull, which is to say incredibly DULL, now I have even less time for cooking than I did at uni.

Luckily I am prepared for such eventualities with a host of recipes that take very little time to make and require minimal washing up, workers of the world not not despair you can still have delicious mid-week dinners. One of the best fail-safe speedy dinners is risotto. I chose to make it with asparagus, courgette and mint because its lovely and summery (and obviously it was the only thing I had in the fridge!) but if you just follow the first few steps then you can add any veggies you like at the end.

Washing up rating *** I used: a knife and a chopping board, a mug, a pan a wooden spoon and a bowl and fork.

There was an error retrieving images from Instagram. An attempt will be remade in a few minutes.

who wants life to be tidy when you can have more fun making a mess??!

A London Based Food Blog & Travel Blog - Always Cooking, Eating & on the Move